From the December 30, 2010 edition of the Wall Street Journal

Charles Martin is among hundreds of dentists doing business in the Richmond, Va., metro area. But his resume lists one credential that few of his peers boast: Author.

“If you write a book, you are an expert,” says Dr. Martin, who spent roughly $40,000 to publish and market five books, including “Are Your Teeth Killing You?” and “This Won’t Hurt a Bit.”

Dr. Martin says those books have brought in roughly 450 new patients to his practice. “Who would you rather go to?” he asks. “Someone who has written a book, or someone who hasn’t?” 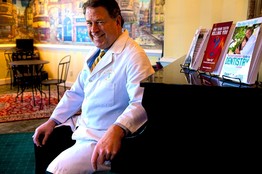 Books are becoming popular marketing tools for the self-employed. An estimated 764,448 titles written by entrepreneurs and other nontraditional authors were published in the U.S. in 2009, including reprints. That’s more than double 2008’s figure and six times as many as in 2007, according to Bowker LLC, which, for U.S. publishers, assigns the unique ISBN numbers that identify books.

Entrepreneurs in most cases aren’t actually looking to produce best-sellers. Instead, most are taking advantage of new forms of publishing, including electronic publishing and print-on-demand, to generate “invisible income,” says Adam Witty, founder of five-year-old Advantage Media Group Inc., a Charleston, S.C., publisher. That income stems from “speaking, consulting, press and new customers. It’s not about selling copies.” Mr. Witty is the author of “21 Ways to Build Your Business with a Book.”

For the entire article go to

Best-selling author and “marketing with a book” expert Henry DeVries is an authority on typing and talking: how to maximize revenues by writing books and making speeches. He speaks to thousands of business leaders, professionals, and consultants each year, teaching them successful tactics that shine a spotlight on their company, cause, or career. Along with his best-selling books — Self-Marketing Secrets, Client Seduction, Pain Killer Marketing, and How to Close a Deal Like Warren Buffett — the buzz-building tools of Henry DeVries have been used to dramatically increase revenues and leverage marketing budgets for two decades. He speaks to thousands of professionals and consultants each year, teaching them scientifically proven tactics that bring them new clients.
View all posts by Henry DeVries →